Symbols are an important part of our life. The advent of the written word has been shown as one of the most important phases of societies. Even if a society did not develop a “fully developed” writing system for the usage of the general population large sectors of every organized people utilized some form of symbols to express themselves.  The symbols that one intuits or are drawn to, are indicative of a person’s chosen spiritual and metaphysical path. The symbols below (Figure 1) are religious/spiritual symbols that have been devised over the ages. Each symbol is associated with a particular metaphysical or religious path and have taken on meanings over time.

In general, the above symbols should illicit positive or at least ambivalent feelings as one looks at them. One or two of the symbols in figure 2 may illicit a negative feeling from certain sectors of the population. The symbols themselves are neither positive or negative, they are representations that have been given “life” by sectors of the society and hence have been imbued with a certain amount of power and/or meaning.

The first symbol can be traced to early Neolithic Celtic and Germanic societies, as well as utilized in Hinduism, and in no way, was intended to represent what it came to represent in Hitler’s Germany. The middle symbol is, of course, the Neolithic goddess but became “forbidden” in Middle Ages Europe as a symbol for promiscuity and separation from “God”. The third symbol, the pentagram, has deep significance for those of us who follow a Pagan pathway. This symbol has been called the Devil Star by large sections of modern western society.

Another use of symbols is within healing disciplines. The symbols in Figure 3 are the easily recognized Reiki symbols.

Each symbol is utilized for a different purpose within Reiki just as other healing disciplines utilize symbols for their practices.

According to the Usui Reiki method, the Reiki symbols are used to channel the Reiki energy to assist in healing of the individual. A careful search of alternative healing methodologies will bring one to a plethora of symbols used for healing including chakras, spirals, swastikas, circles, and triangles. Each of these symbols have meaning for the individual who uses them. They become important to the person who uses them regardless of any other interpretation.

Language as defined by the Oxford College Dictionary is a system of visual, auditory, or tactile symbols of communication and the rules used to manipulate them. The Indo-European pagan societies utilized language to communicate with each other and other societies. Two such symbolic representations of this communication are Ogham and Runes. Each belonging to a particular culture. In the case of the Ogham; the Cymric, (Welsh)/ Britons and the Runes by the Proto-Germanic/Norse cultures.

The “Celtic” writing system known as the Ogham alphabet (figure 4) is accepted as a set of symbols that were utilized by the Druids, priestesses and members of the society that frequented what is now known as the United Kingdom. Each symbol has become identified with a particular tree and was utilized by the bardic class as a reminder of the triads and teachings of the culture. 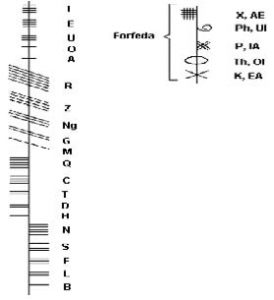 The Nordic society utilized runes (Figure 5) which were utilized by the peoples of Northern Europe from the first century until well into the Middle Ages as both a written alphabet and a system of symbols used for magic and divination.

Similar to the Ogham alphabet each rune has a meaning. While the Ogham represent trees the runes represent actual words in the Proto-Germanic languages. For example, the names of the first three runes, “fehu”, “uruz”, and “þurisaz” meaning “cattle”, “aurochs”, and “giant”, respectively. 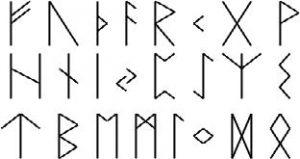 Magic, can be defined as the desire to create intentional change. Whatever discipline, or path one follows this definition seems to express the general sense of the word. Aleister Crowley (Golden Dawn) defined it as;” the science and art of causing change to occur in conformity with the will”, ( Magick in Theory and Practice).  Dr.  John Dee, (Enochian Magic) defined it as the evocation and commanding of various spirits. (Dr. John Dee’s Journals).

The usage of language and symbols in any Magical system is common. No system is better than any other system, just as no language and no symbols are inherently bad or good. .  There can be no one perfect system, language, set of symbols. Everything is a function of intent. As long as each individual or society recognizes the right of every other system to exist then remember,

Harm None otherwise do as ye will.